Now that Facebook has finally added hashtags support to the site for most users (rolling out to everyone over the new few weeks), you might be wondering what they are. Sure, you’ve seen/heard them on TV and radio and all over the internet. Something like #grammys or #superbowl or even #poptarts. You know, hashtags.

Hashtags actually started on Twitter as a way for users to keep their posts organized and to join larger, global, conversations. You see a word preceded by a # and you can click it to find even more stuff tagged the same way. It’s actually pretty cool.

On Facebook, they will work the same way. You will notice any tags will be the same color as hyperlinks on Facebooks and when you click them, a nifty pop-up window will appear, like this. 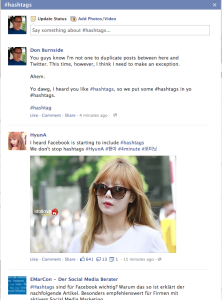 So, depending on security settings, you will be able to add to conversations that are happening across the whole of Facebook, not just your own little corner of it. All thanks to the power of the hashtag.

Or not. One of the nice things about the hashtag is that you don’t even need to use them at all. In fact, I would guess that most of you, especially those of you that have really dialed in your privacy settings, probably wouldn’t get much use out of them at all. The way Facebook security is supposed to be handling hashtags means that, unless you post is set to public, then the tag won’t be visible to everyone, only to friends or friends of friends.

To use hashtags on Facebook, start by typing a pound sign (#) and a word directly after it. When you press space, comma or period (or any character that is not a letter or number), the tag is made and will become a link one you post. For best results, hashtags are best used on single words or even brand names. Tags like #chocolate, #craftbeer or #football are good examples. Some of you are going to cave, much as I did, and create goofy hashtags like #ImMakingThisReallyLongToBeSillyAndProveThatItCanBeDone. That would become a hashtag (tested) just like the others, but it wouldn’t be very useful for anything other than making your followers giggle. Another silly thing is to add hashtags to every word of the post. Makes the post difficult to read and not much else.

Used sparingly, they are a neat tool to have and make for a great way to add your voice to a conversation. You can also link to them to share with others. For example, here are the current posts with the #hashtag hashtag on Facebook that you have permissions to read. Pretty neat, right?