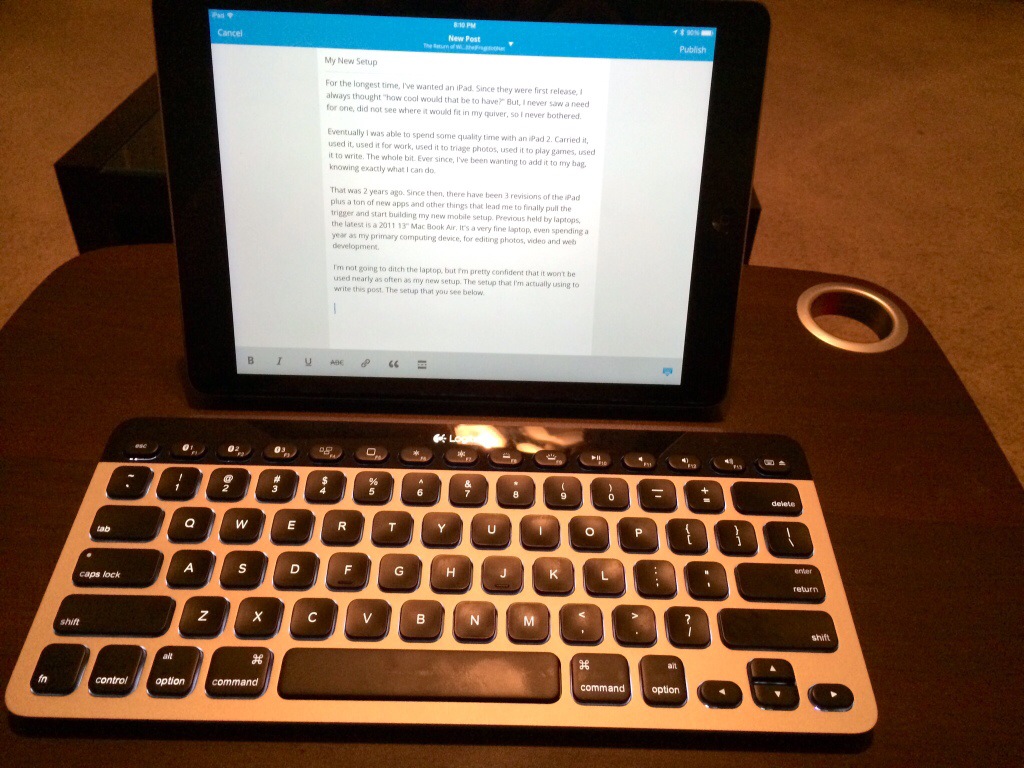 For the longest time, I’ve wanted an iPad. Since they were first release, I always thought “how cool would that be to have?” But, I never saw a need for one, did not see where it would fit in my quiver, so I never bothered.

Eventually I was able to spend some quality time with an iPad 2. Carried it, used it, used it for work, used it to triage photos, used it to play games, used it to write. The whole bit. Ever since, I’ve been wanting to add it to my bag, knowing exactly what I can do.

That was 2 years ago. Since then, there have been 3 revisions of the iPad plus a ton of new apps and other things that lead me to finally pull the trigger and start building my new mobile setup. Previous held by laptops, the latest is a 2011 13″ Mac Book Air. It’s a very fine laptop, even spending a year as my primary computing device, for editing photos, video and web development.

I’m not going to ditch the laptop, but I’m pretty confident that it won’t be used nearly as often as my new setup. The setup that I’m actually using to write this post. The setup that you see above.

A 32GB iPad Air with a Logitech Blue Tooth keyboard. Inspired by this. Except for the VZW MiFi (I’ll use my phone as a hotspot), I have the exact same hardware and _most_ of the apps. I have been dialing in this setup for about a week and I have to say that I’m really happy with how it’s coming together. The keyboard is especially awesome. The keys have a nice feel and are slight raised, more so than the standard Apple Bluetooth keyboard. As a bonus, this one is backlit and can be paired with up to 3 devices (not at the same time). For $5 more than the Apple keyboard, I’d say it’s money well spent. There is a really good chance that I’m going to put this on my desk to use as my main keyboard.

And the iPad is the latest, greatest iOS device. 32GB, WiFi, exceptional screen and great performance. It’s the same story that you have already heard.

Now I’m 100% Apple. Starting with the iPhone 5s, the iPad Air, Mac Book Air, Mac Mini and Apple TV, I think it’s time, for now, to stop. Oh, don’t worry, still have the fat Nano too (still works like a champ!) and my first iPod that works as well.

3 replies on “My Latest Setup”

I definitely thought it would be weird to carry around my “desktop” keyboard, but it is pretty sweet to be able to take it with me. I really love the feeling of the keys on this on this thing!

I’ve been using a similar workstation setup for almost 2 years now – work MBA on a stand with older Dell 20″ LCD monitor (DVI), personal MBA on another stand attached to the same monitor (VGA, ugh), and iPad 2 (occasionally using AirPlay to the LCD monitor). I use the Logitech K810 and switch between the 3 devices as needed. The keyboard feel is great, the battery charge lasts me about a week, the backlit keys are a nice bonus, and when I need to pack up bits and pieces for a road trip it’s all quite portable (minus the 20″ monitor…)

I’ve got a similar Logitech bluetooth keyboard, but the ipad slides into a groove right over the numbers keys, turning it into a little laptop. I LOVE that feature! The keyboard attaches with the standard magnets to clip on like a cover, when not in use.

Unless I’m doing client work and need a full-sized laptop, this is what I take when traveling. Makes life SO much easier!