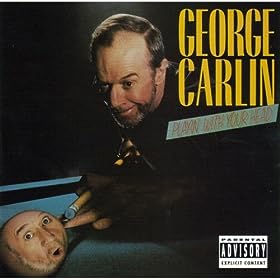 Most all of you know that George Carlin died last week. He was, truly, a brilliant comedian, again, as most of you know. I have great memories of us sitting around my uncle’s house in northern california and laughing so hard it hurt. Laughing until it didn’t make a noise laughing. George was one of the funniest comedians I’ve ever heard, even today.

He’s known for his HBO specials, odd movie appearances (Bill & Ted’s, Cars, etc.) and for hosting the popular kids show Thomas the Tank Engine. And being the first person to host SNL. Don’t forget, the 7 words you can’t say on television. I know I never have and if you ever meet me in person, ask and I might tell you exactly what they are. Yes, I memorized them. Yes, before I was driving.

But, besides all of that, he did quite a few comedy albums. I do mean albums on a couple of these, because that is where I first heard them. Nothing like laughing your self senseless to crackly goodness of George Carlin on vinyl. Good times, good times.

Well, as it turns out, Amazon has a few of his albums available for download. If you are ever looking to laugh _yourself_ senseless and don’t mind more than a few 4-letter words, might I recommend the following.

Class Clown – Home of the 7 words you can’t say on television as well as Sharing a Swallow and How Much is that Dog Crap in the Window. Oh man, it doesn’t get any funnier than this.

A Place for My Stuff – I think of this has his first album that got widespread attention, and it was also one of his first HBO specials.

Or, you know, just pick from one of his other 19 albums they have there. You won’t be disappointed.

And, you won’t stop laughing.

>Carlin is noted for his political insights, his black humor and his observations on language, psychology, religion and on many taboo subjects. Carlin and his “Seven Dirty Words” comedy routine were central to the 1978 U.S. Supreme Court case F.C.C. v. Pacifica Foundation, in which a narrow 5â€“4 decision by the justices affirmed the government’s power to regulate indecent material on the public airwaves.

>In the 1990s and 2000s, Carlin’s stand-up routines focused on the flaws in modern-day America. He often took on contemporary political issues in the United States and satirized the excesses of American culture.

>He placed second on the Comedy Central cable television network list of the 10 greatest stand-up comedians, ahead of Lenny Bruce and behind Richard Pryor.[20] He was a frequent performer and guest host on The Tonight Show during the three-decade Johnny Carson era, and was also the first person to host Saturday Night Live.

If you do get any, be sure to check back and let us all know what you thought.